Our PhD employment problem is very simply described: there’s a mismatch between the number of graduate students earning doctorates each year and the number of tenure-track faculty positions available to them. There are too few tenure-track jobs for the PhD recipients who are qualified to compete for them. The problem is most commonly attributed to an overproduction of PhDs. But it can be understood and has been argued to be the result of an underproduction of tenure-track positions symptomatic of institutions’ increasing reliance on non-tenure-track faculty appointments.

Figure 1, with its red trend line tracking new PhD recipients and its blue trend line tracking jobs advertised in the MLA Job Information List, has formed our basic image of the depressed academic job market that has persisted since the 1970s. (Click on the chart to see a full-screen version. The curve representing PhD recipients is based on a query for graduates in “English and literature” from the United States Survey of Earned Doctorates [SED] data as maintained on WebCASPAR, a National Science Foundation [NSF] Web site of United States government data resources on higher education. “English and literature” is an NSF aggregate of several SED subfields, including English and American language and literature, creative writing, comparative literature, classics, folklore, speech and rhetorical studies, and, beginning in 2012, rhetoric and composition. The SED is the federal government’s annual census of new PhD recipients.) 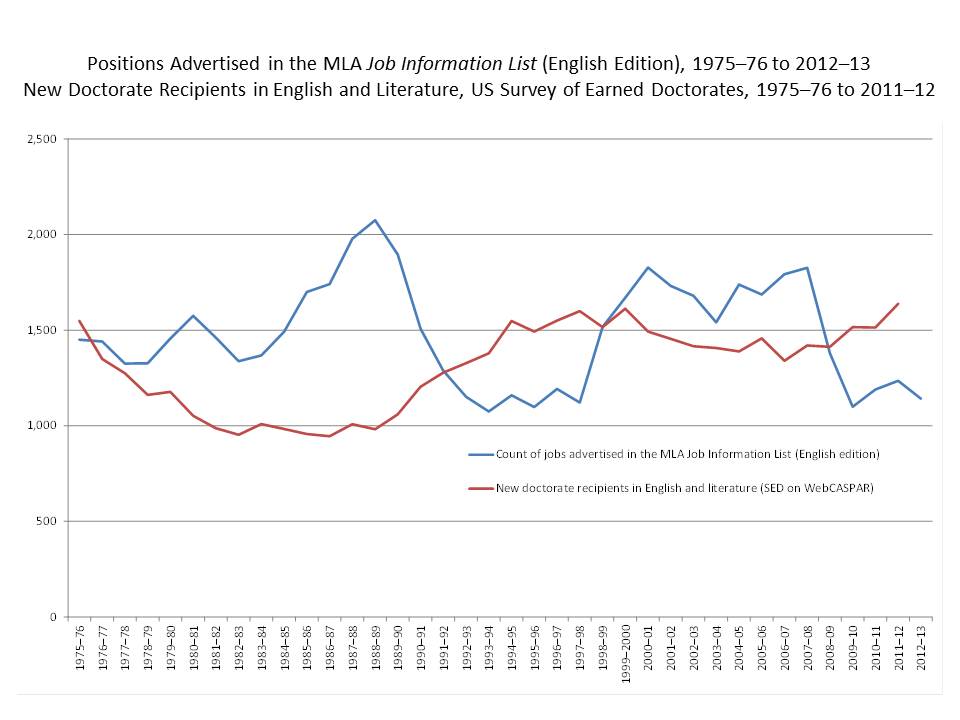 More than an image, this charting has served as our mental model for the job market and its troubles—especially the two episodes of acute crisis that become vividly apparent where the blue trend line for jobs plunges below the red trend line for PhD job seekers in the mid-1990s and most recently since 2008. I want to argue that this model is oversimplified and has led us to think too narrowly about PhD career paths, actual and possible.

Consider, for example, the record of initial employment placements across the fourteen studies of PhD placement that the MLA has conducted since 1977, as shown in figure 2. (The most recent study sought information about placement, as of November 2010, of graduates who received their degrees between 1 September 2009 and 31 August 2010.) This charting of MLA placement survey findings reminds us that the PhD employment (and unemployment) picture has always included several strands in addition to postsecondary faculty positions on and off the tenure track—including administrative posts in postsecondary institutions and employment outside higher education as well as postdoctoral fellowships. 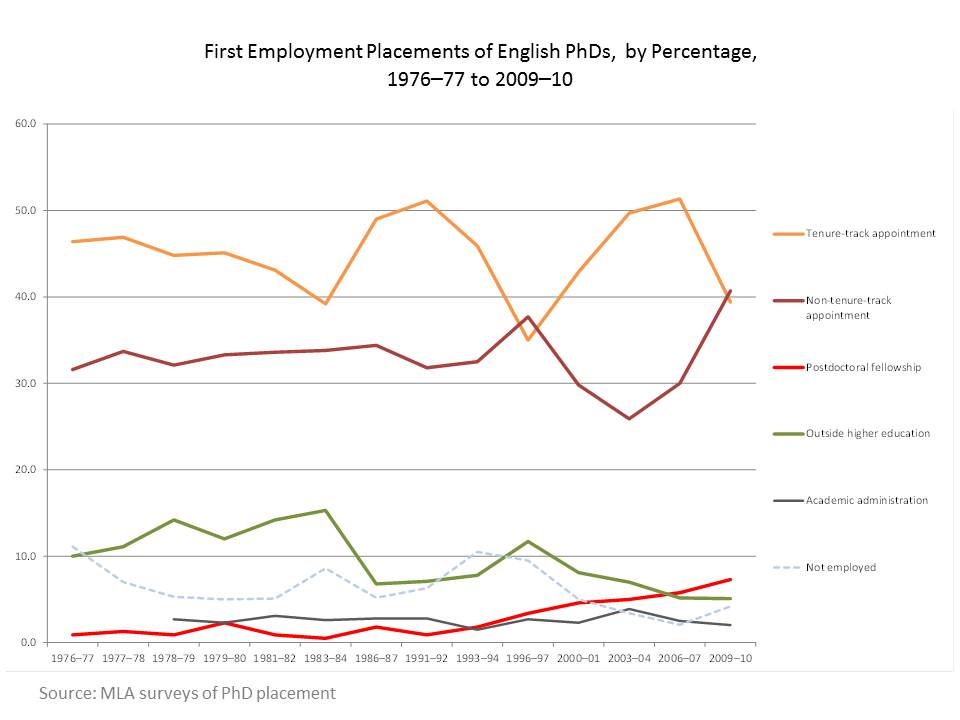 The crisis episodes of the mid-1990s and since 2008 are clearly reflected in the sharp downturns in the percentage of graduates finding tenure-track placements and corresponding upturns in the percentage taking full- or part-time non-tenure-track positions. At the best, across the record of fourteen MLA surveys over three decades, just above half of a given year’s graduates have found placements to tenure-track faculty appointments in the year they received their degrees. In trough years, the figure has dropped below 40%. (Shown here are findings for graduates of doctoral programs in English. The picture for languages other than English is similar.)

Also striking in the record of the MLA placement studies is how unchanging and predominant placement to postsecondary teaching has been. Across the ups and downs of three decades, close to 80% of program graduates have consistently gone on to postsecondary teaching right after graduate school, whether as tenure-track assistant professors or as non-tenure-track instructors. The notable development has been an exchange of placements beyond postsecondary teaching in favor of placement to postdoctoral fellowships. Employment outside higher education, whether in K–12 education, government, not-for-profit organizations, or for-profit enterprises, has actually seen significant decline since the 1980s. The unemployment rate (graduates reported as not employed and seeking employment), which, after reaching 10.5% in the crisis of the 1990s dropped to 2.1% in 2006–07, increased to 4.2% in 2009–10. Again, what we are looking at here is placement of graduates directly after completing the PhD, within the same year a graduate received the degree. Interestingly, and in contrast to postdoc placements, placements to academic administration, where we might expect to see some indication of a turn to nonfaculty (or “alt-ac”) positions in higher education, has yet to break out on the MLA survey as a significant percentage of initial placements, reaching a peak at 3.9% in 2003–04 and dropping back to 2.0% in 2009–10.

The concentration of humanities’ graduates in postsecondary teaching positions immediately after completing doctoral study is striking in comparison with graduates in social sciences and sciences, as data from the SED make apparent (fig. 3). If a humanities degree recipient has a definite commitment to employment or postdoctoral study at the time they complete the SED questionnaire, chances are 8 in 10 that the commitment is to a postsecondary teaching job (whether on or off the tenure track), by far the highest among the five major disciplinary areas. 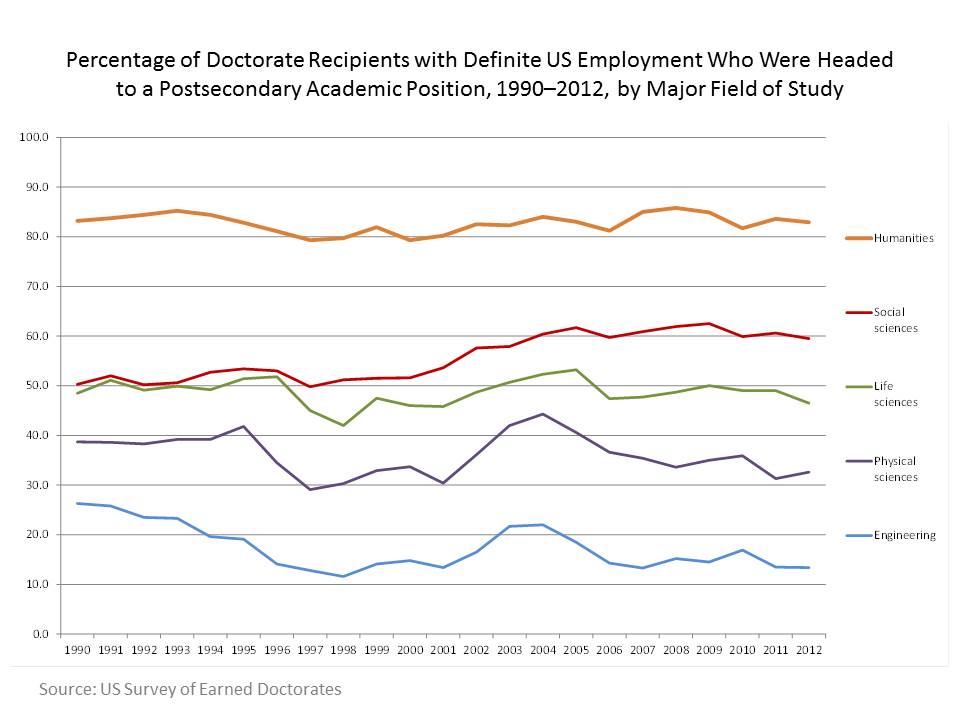 Correspondingly, the SED data show how dominant postdoctoral study is in the sciences and also how the upward trend in placement to postdoctoral study that we saw in the MLA placement findings is shared across the disciplines (fig. 4). (Do the sharp increase in placements to postdoctoral study in science and engineering after 2008 and the equally sharp drop since 2010 reflect both early adjustments to the financial crisis on the part of programs and graduates and subsequent reduced allocations of government funding for research labs in these fields?) 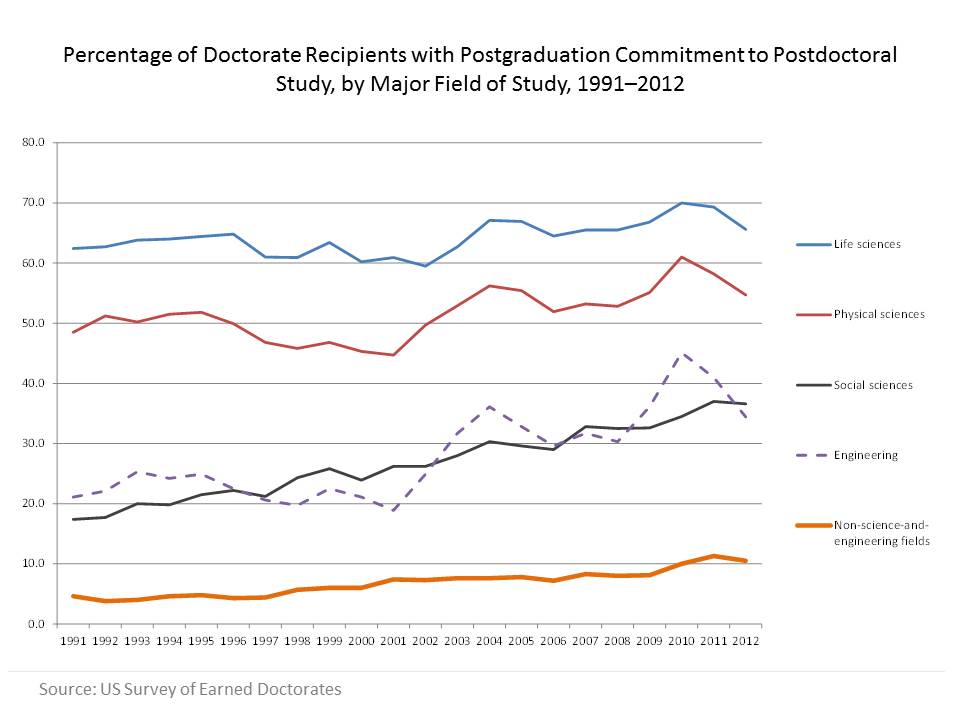 But how does the humanities’ overall placement record compare with that for the sciences and social sciences? Figure 5, drawn from the SED, compares the percentage of graduates in the different disciplines with definite commitments, whether to employment or postdoctoral study, across two decades, from 1991 to 2012. The SED consistently finds that the humanities have the lowest percentage of graduates reporting a definite postgraduation commitment to employment or postdoctoral study. But, no surprise, things have gotten a lot tougher for everyone since 2008. What may come as a surprise is the sharp declining trend for graduates in the life sciences and a trend for the humanities that is actually slightly positive (if by a considerable margin still lowest among the disciplines in the percentage of graduates reporting definite postgraduation commitments, although the distance between the humanities and life sciences has narrowed). 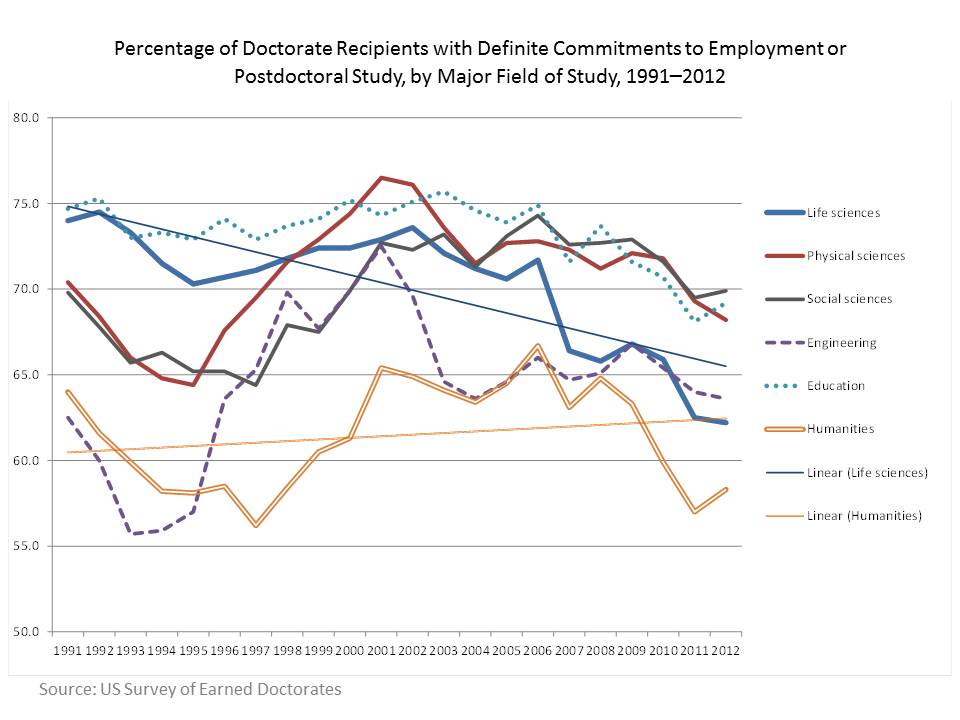 It is illuminating to consider the numbers behind these percentage values (fig. 6). The life sciences have experienced dramatic increases in degree recipients, which have doubled in number since 1982 and show no sign of slowing down. Humanities degrees increased through the 1990s but, unlike the sciences, leveled off after 1997. (The most recent year for which SED data are available, 2012, did see a notable uptick in the number of humanities degree recipients.) 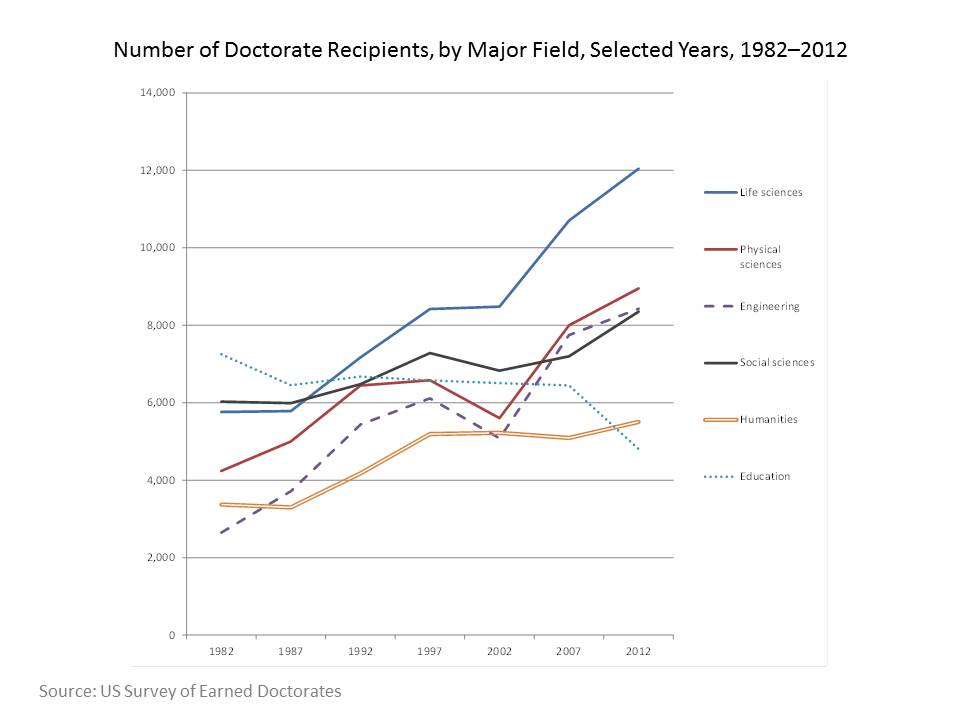 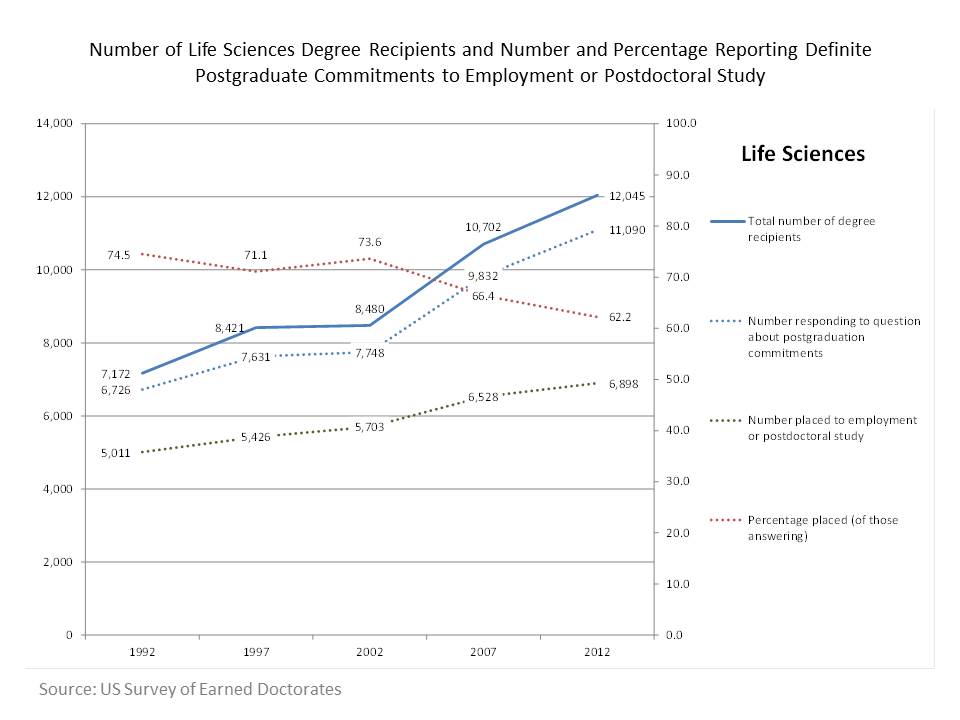 Compared with life sciences, PhD production in the humanities looks flat—as does the number of graduates finding placements immediately after graduation (fig. 8). And the two fields have actually gotten a lot closer in the percentage of graduates with definite commitments to employment or postdoctoral study than was the case ten or fifteen years ago. 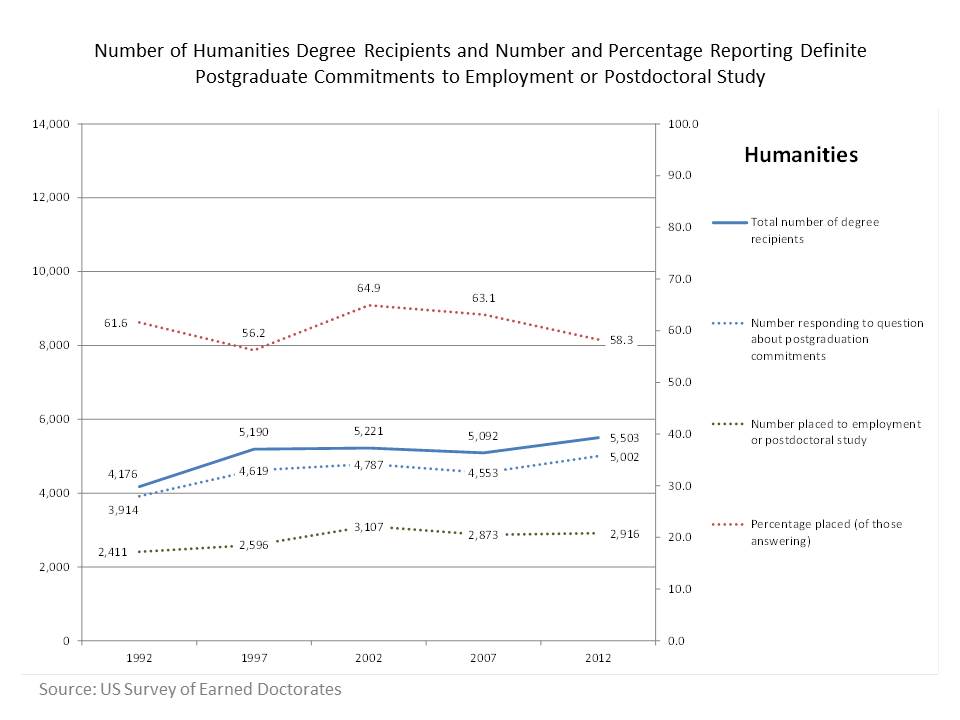 Education shows yet another pattern (fig. 9), with a sharply declining number of graduates receiving degrees—down 25% since 2007—but accompanied by an equally abrupt decline in the number of graduates finding placements. Consequently, the substantial reduction in graduates with PhDs in education has not improved the percentage of graduates reporting definite commitments to employment or postdoctoral study (just under 70% in 2012). 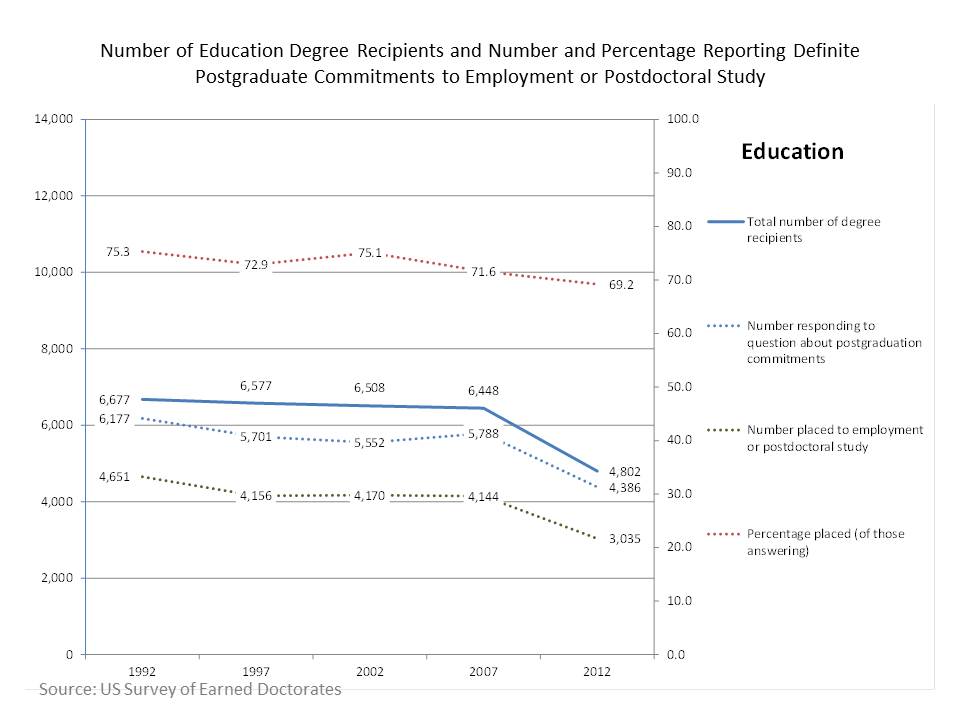 But what about humanities PhD employment and careers in the long term? Figure 10 presents data from the 1995 Survey of Doctorate Recipients (SDR), a United States government survey and companion to the SED that tracks a sample of PhDs from the time they receive their degrees to age seventy-five. In 1995, the last year data were collected for the humanities, the SDR found something on the order of 40% of the entire humanities PhD population working in positions other than postsecondary teaching. 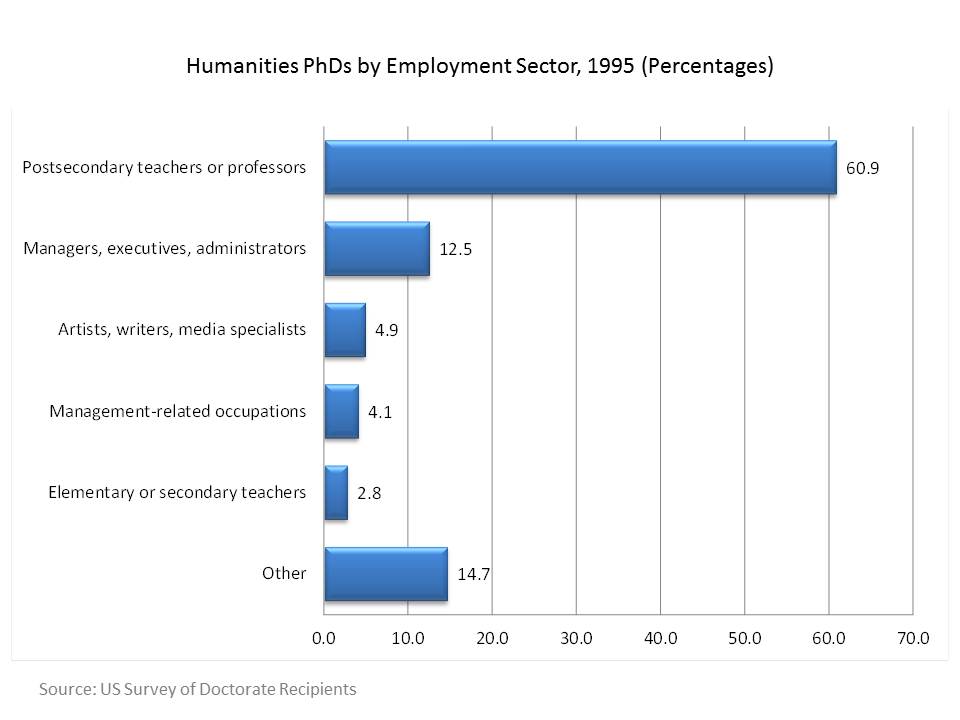 Humanities participation in the SDR, which was funded with support from the National Endowment for the Humanities, was lost when the endowment’s budget was cut in the mid-1990s (data are still collected for the sciences). The lack of current information about the employment sectors where humanities PhDs find work and what they are actually doing in their work has prompted several recent efforts, including projects being undertaken by the MLA and the American Historical Association (AHA) with support from the Andrew W. Mellon Foundation to track the current occupations of post-1995 PhDs and the 2012 survey Katina Rogers directed for the Scholarly Communication Institute (SCI). The AHA has issued a report of findings from its study of PhD employment outcomes. The (very preliminary and subject to change) returns from the MLA’s effort are so far very much in line with the AHA’s findings for history PhDs, as shown in figure 11. A little under 60% of the PhDs we’ve located are working as tenured postsecondary faculty members. Just over 10% are in non-tenure-track faculty positions. Between 6% and 7% hold professional staff positions in postsecondary institutions; between 4% and 5% are deans, provosts, or college presidents (the “senior postsecondary administration” category on this chart); and a not insignificant 21% are working outside postsecondary education altogether. (These early results from the MLA’s research come from a subset of several hundred PhDs, all of whom earned degrees before 2000; consequently, for the purposes of this first, quick take, we did not attempt to distinguish tenure-track assistant professors.) 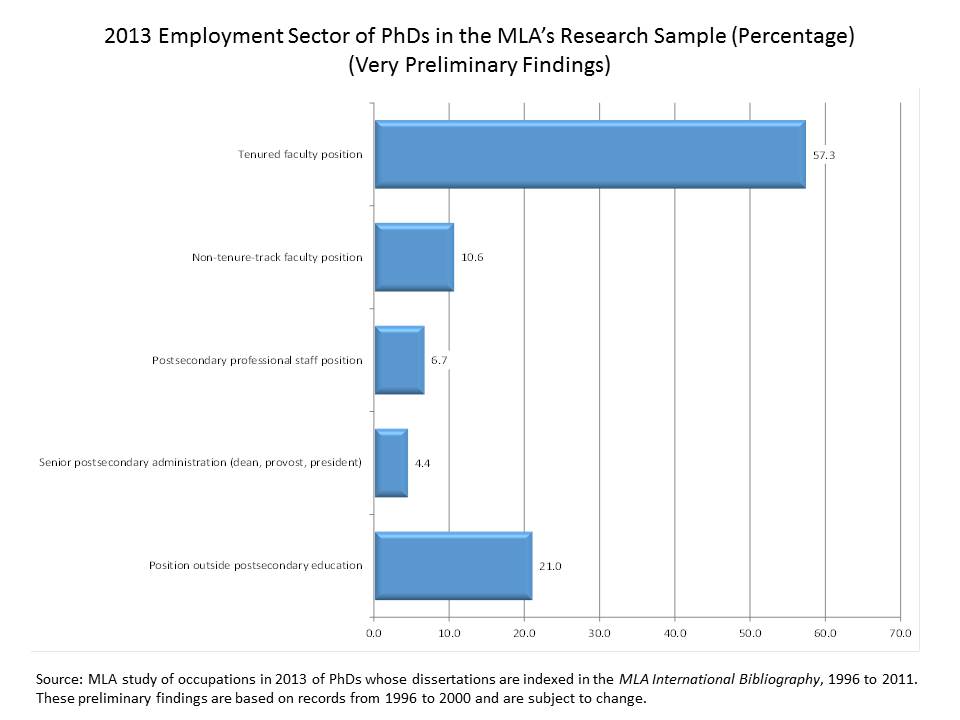 It’s interesting to look at these findings in relation to findings from the SCI’s 2012 survey, shown in figure 12, since that effort focused specifically on people with graduate degrees who were working in “alt-ac” positions—pursuing careers in postsecondary institutions but not as faculty members. (The SCI findings include ABDs and respondents who left graduate school with master’s degrees as well as those who completed the PhD.) Asked about the career they expected to enter at the start of graduate school, the SCI respondents overwhelmingly indicated a career as a tenured faculty member. 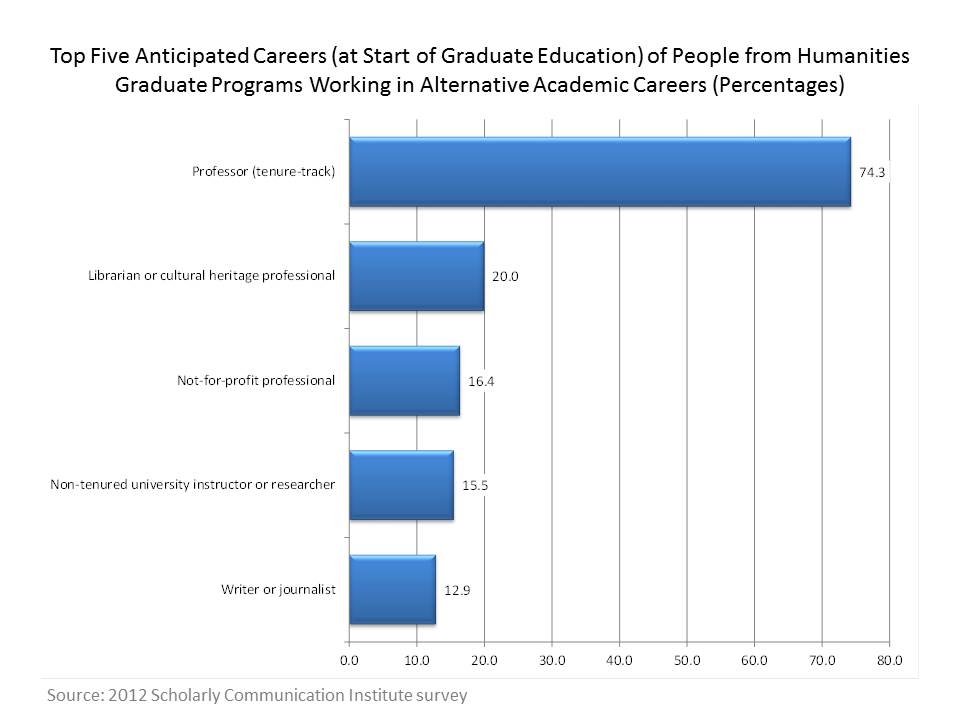 And an equally overwhelming percentage of the SCI respondents said that when they started graduate school they were either certain or fairly certain that they would pursue a career as a tenured faculty member (fig. 13). Remember, for most of the survey respondents, their actual careers have taken them in other directions. 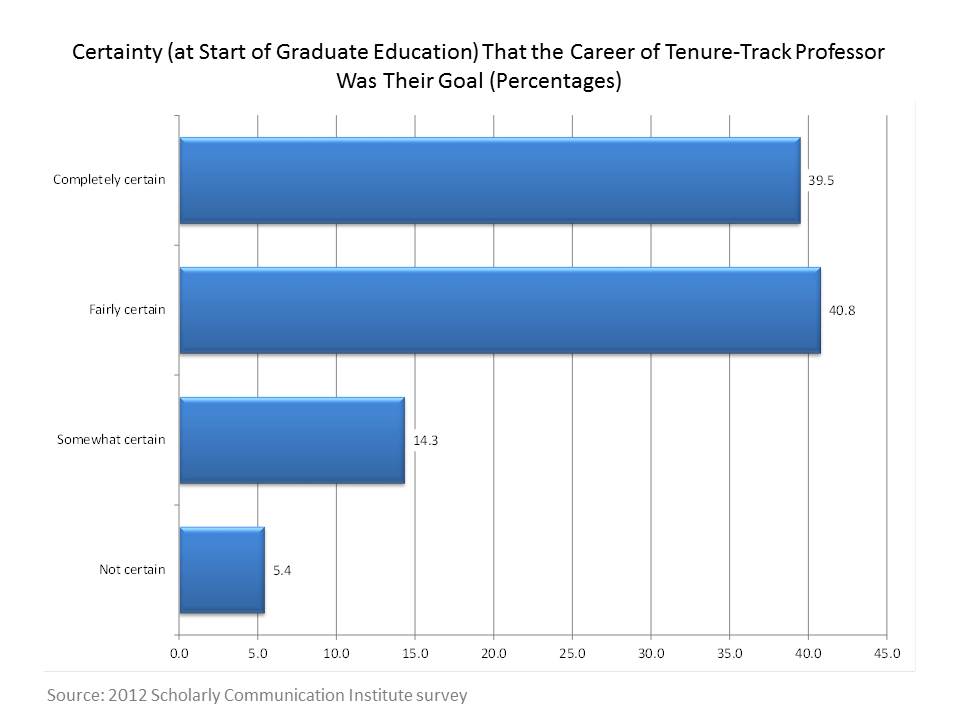 So the evidence we possess points to two conclusions: people who enter the long and arduous path of doctoral study in the humanities do so having a postsecondary faculty career as their primary goal, and people who pursue graduate education in the humanities actually find careers in a far broader range of professional positions than postsecondary teaching, even if their first job after graduate school is a postsecondary faculty position on or off the tenure track. So the question isn’t whether doctoral study can lead to careers beyond postsecondary teaching—it already does and has for decades. The question comes down to the view doctoral programs and their inhabitants take of what has long been the simple fact.

But, given that graduate students in the humanities declare becoming a postsecondary faculty member as their predominant career goal and motive for undertaking doctoral study, it seems pertinent to our discussion to remind ourselves what is happening to the faculty. That is the topic for The Trend‘s next post.

14 thoughts on “Our PhD Employment Problem, Part I”