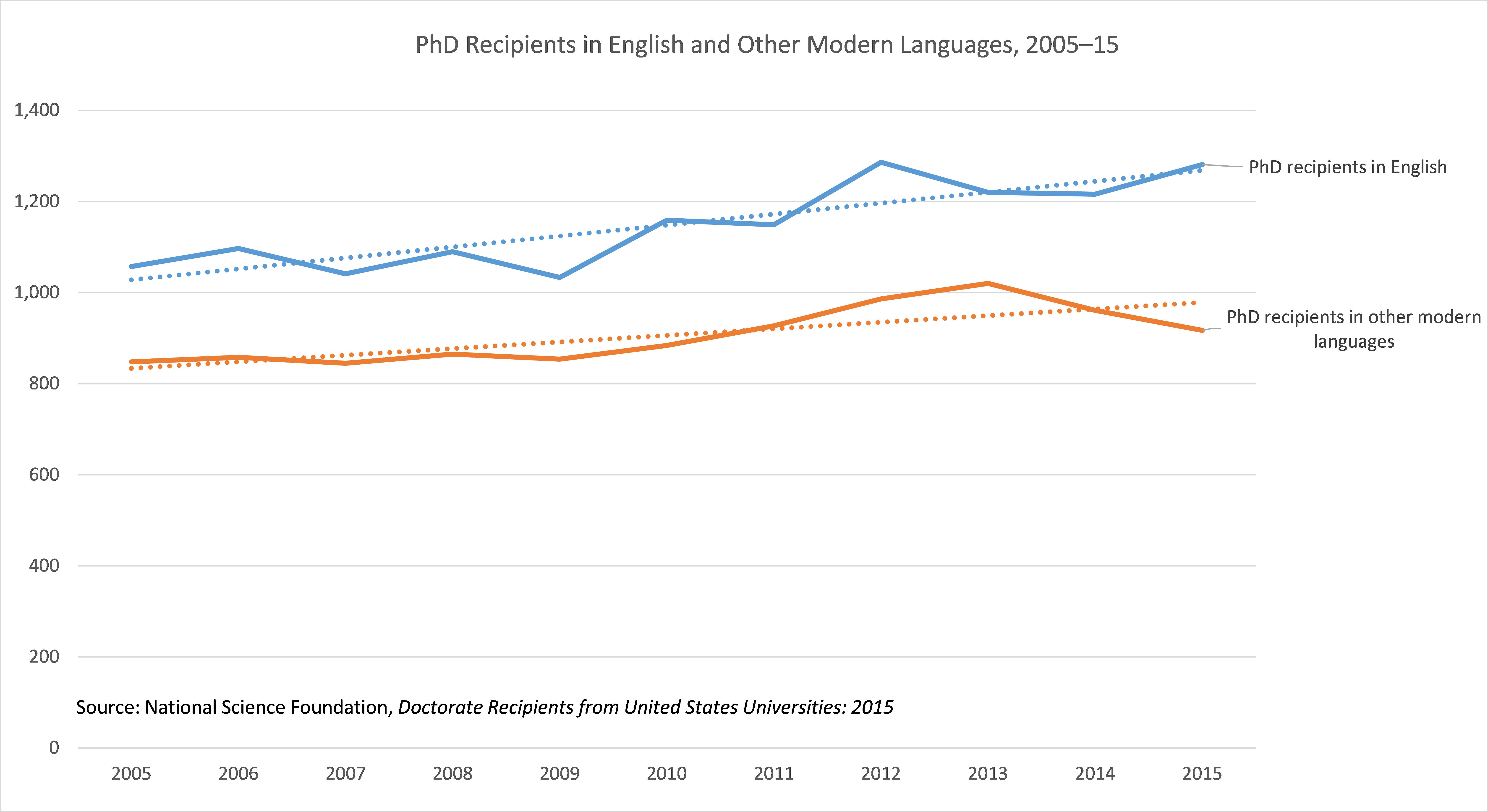 The increases since 2009 are particularly concerning, given the severe contraction of entry-level professorial rank positions that has marked the same years. Figure 2 shows the SED counts for PhD recipients in English and other modern languages from 2005 to 2015 against the trend lines for ads for full-time assistant professors in the MLA Job Information List over the same years. Over the six years 2010–15, PhD production in English has averaged 14.6% higher than the average for the previous five years, 2005–09, while ads for assistant professors have averaged 37.6% fewer. In other modern languages, the number of doctorate recipients averaged 11.1% higher over the six years 2010–15, while ads for assistant professors averaged 33.7% fewer. 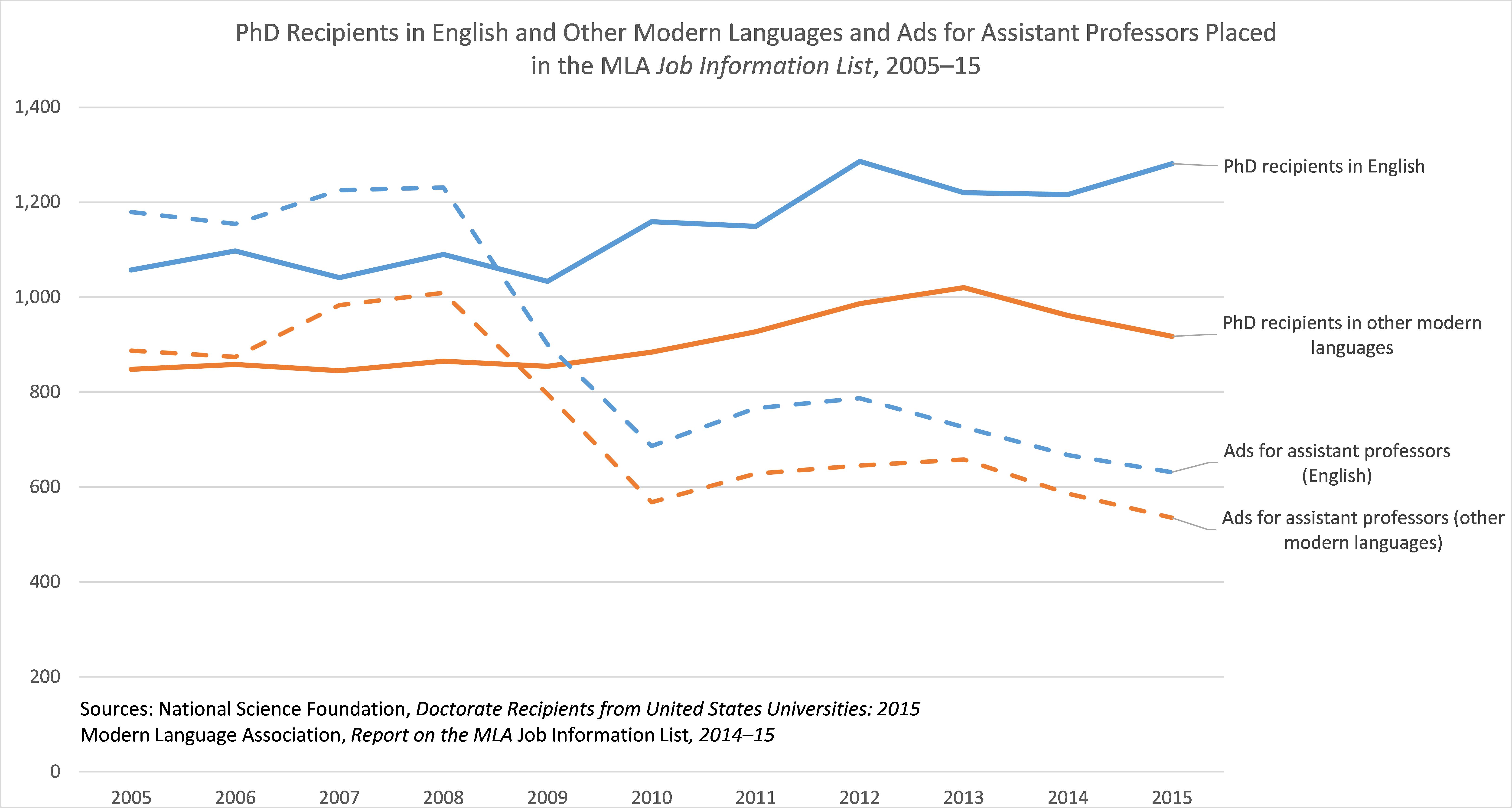 The contrary trends in PhD production and academic job opportunities suggest that programs and the profession must return yet again to the question of graduate student enrollment and the size of doctoral programs. The national aggregate of modern language PhD recipients represents aspirations and decisions accumulated across English and other language programs in the 162 universities that awarded degrees in letters and the 86 that awarded degrees in other modern languages in 2014–15, as shown in SED table 8. The institution-by-institution enumeration underscores the critical importance of institution- and program-level tracking of the employment outcomes and career paths of students who undertake doctoral study. The question of program size can only by addressed locally and hinges largely on how readily program graduates find their way to economically sustaining careers, whether in academia, in secondary schools, or in business, government, or nonprofit organizations. We have extracted the SED enumeration of degree recipients in letters and foreign languages from table 8 and placed the data in a spreadsheet that lists the institutions according to the number of PhD recipients they graduated in 2015.

Note: The MLA counts of graduates in English and other modern language doctoral programs are drawn from table 13 in the set of 72 data tables for the 2015 SED. The MLA counts reconfigure the subfields that the NSF aggregates under “letters” and “foreign languages and literatures.” To count PhDs in English, we aggregate six of the eleven SED subfields that make up the NSF’s “letters” category—English language; English literature, British and Commonwealth;  American literature, United States and Canada; creative writing (initiated in 2007); rhetoric and composition (initiated in 2012); and speech and rhetorical studies. Our count for “other modern languages” includes comparative literature (which the NSF places in letters), along with the eleven subfields that make up the NSF aggregate “foreign languages and literatures”—Arabic, Chinese, French, Germanic, Italian, Japanese, Latin American, Russian, Slavic, Spanish, and other foreign languages. Omitted from our count for modern languages is classics, which the NSF counts under letters. The NSF categories and the subfields and degree recipients counted under each category are shown in SED table 13. We have extracted the section of table 13 that covers humanities and arts subfields and placed the data in a spreadsheet that enumerates degree recipients by subfield across the eleven years 2005–15.