How to promote the value of study in the humanities and how to give a convincing public account of the benefit an undergraduate might expect to receive from majoring in a humanities discipline have been perennial questions for academic humanists and humanities departments. Both questions gained urgency after 2009, when programs began seeing declines—in some cases reportedly precipitous—in the number of undergraduates declaring a humanities major. The anecdotal reports were connected to currently enrolled undergraduates. But they foretold declines that appeared two or three years later in the systematic degree completions data that the federal government collects as part of the Integrated Postsecondary Education Data System (IPEDS). As made available on the National Science Foundation’s WebCASPAR site, IPEDS degree completions show steep downturns in English and history since 2012, following a long period of relative stability through the 1990s and early 2000s. The other core humanities disciplines—languages other than English and philosophy and religious studies—saw similar, if less dramatic, declines (fig. 1). The recent decline has eroded 48.6% of the increase in bachelor’s degrees English saw after 1987 and 39.3%, 22.2%, and 25.6% of the increases that history, languages other than English, and philosophy and religious studies, respectively, saw until as recently as 2012. 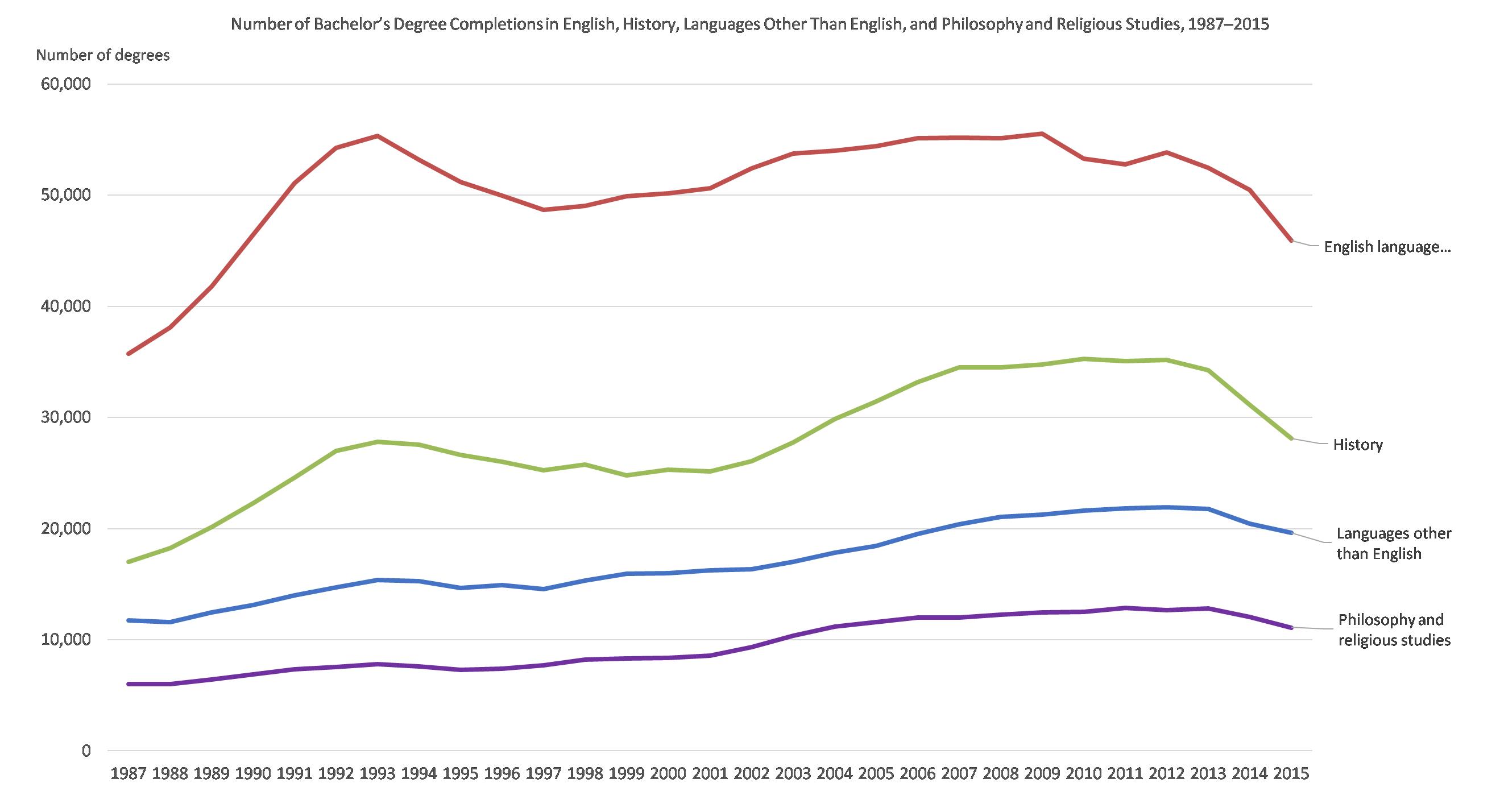 Figure 1 shows a twenty-nine-year span of data back to 1987, the year the United States Department of Education introduced the Classification of Instructional Programs, which categorized the fields of study in which institutions confer degrees with greater detail than before. (In the Department of Education’s pre-1987 field categorization, philosophy and religious studies was not broken out as a separate discipline, but included in “other humanities.”) Figure 2, which includes data going back to 1966, shows that the current decline, measured in absolute numbers, is—as of 2015—still modest compared with the decline in degree completions that English and history experienced in the 1970s. 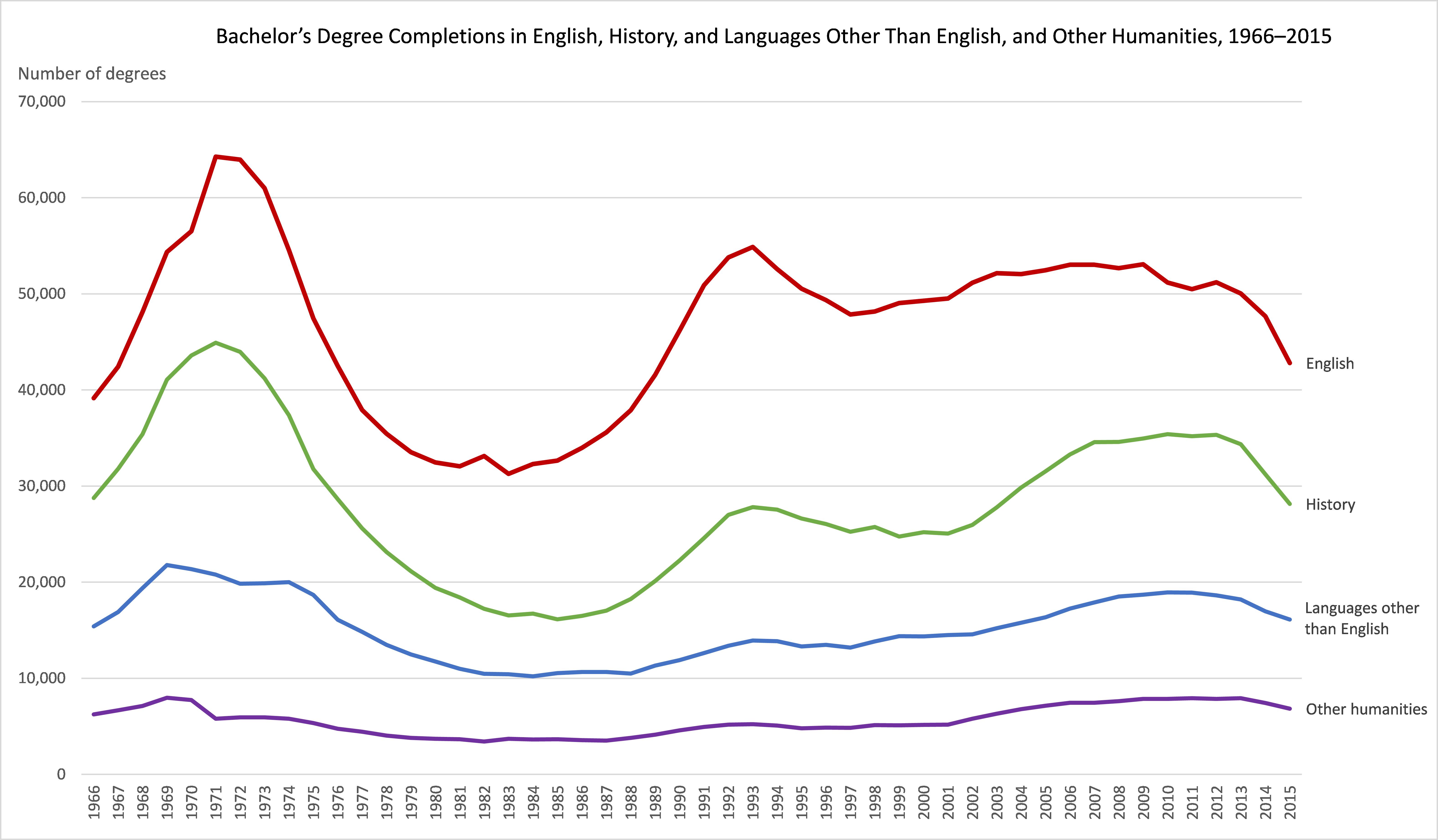 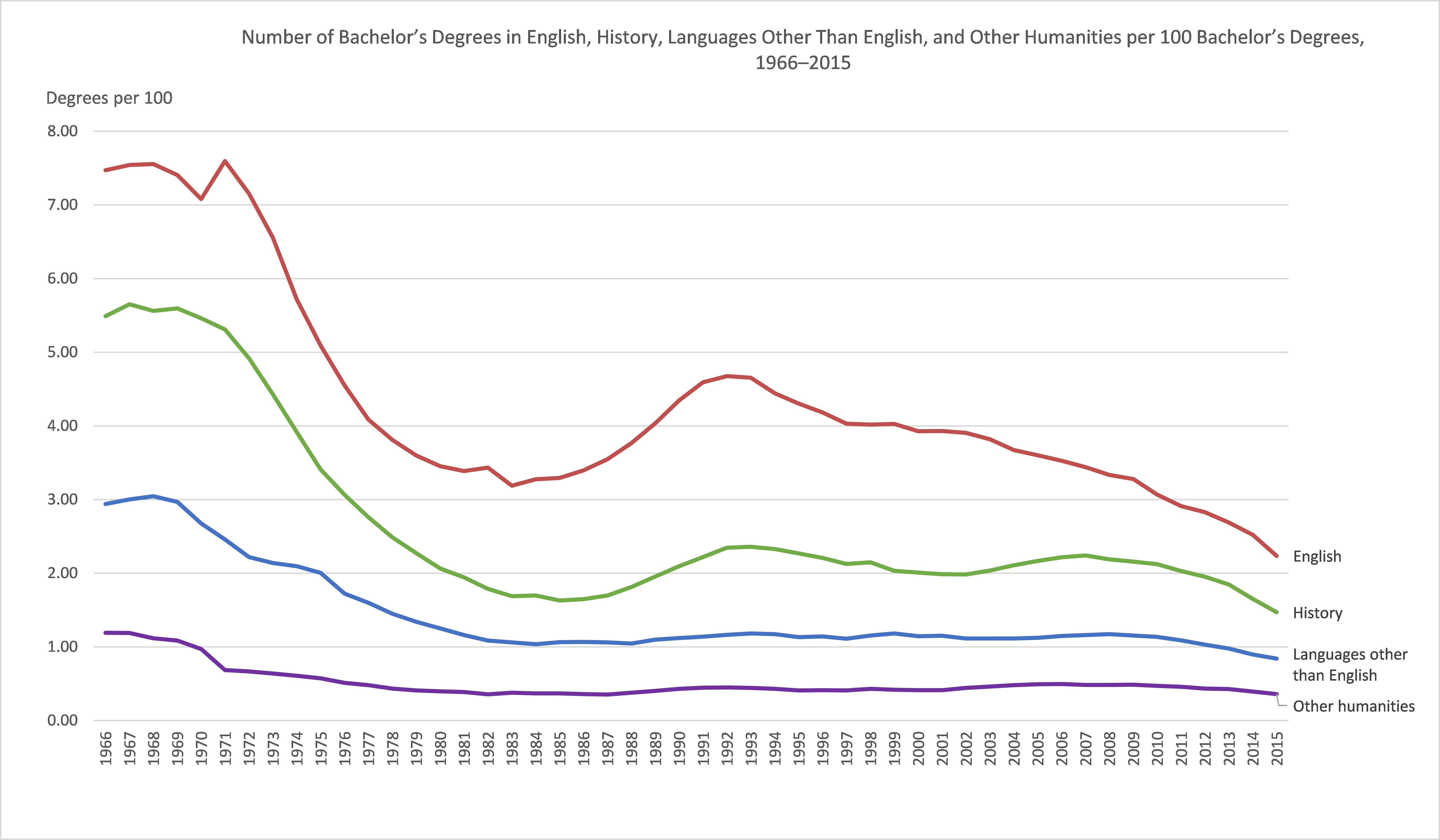 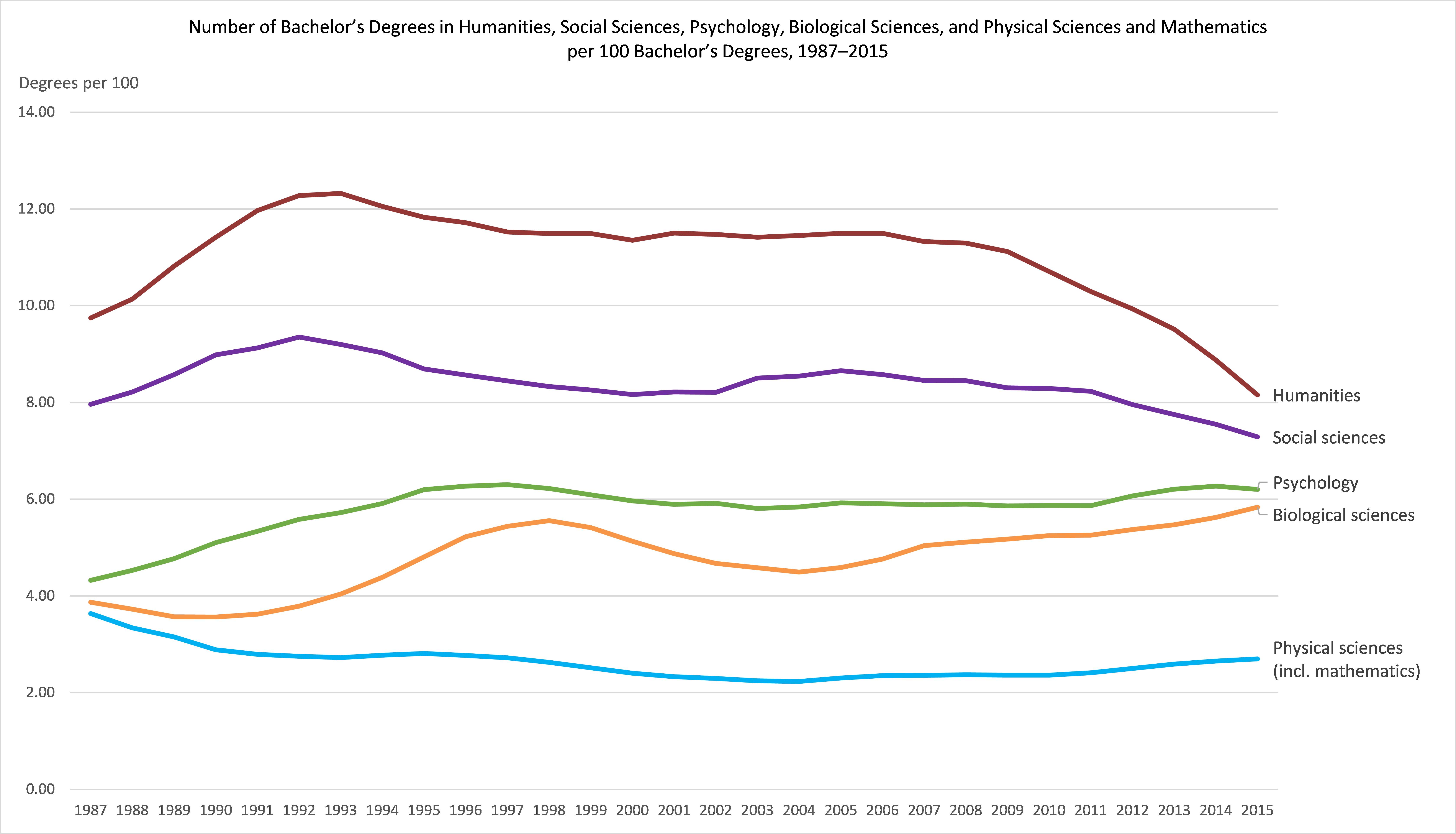 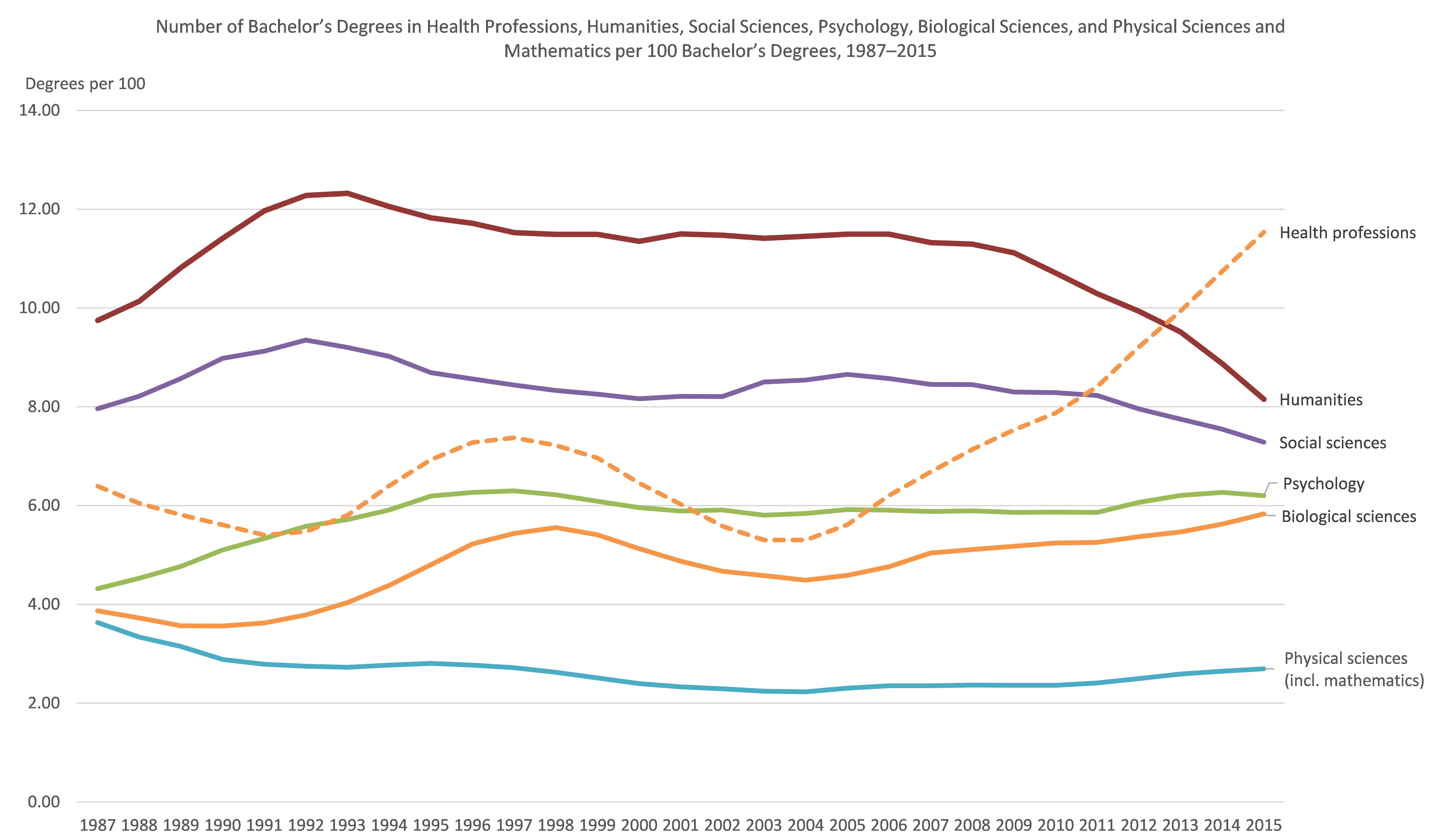 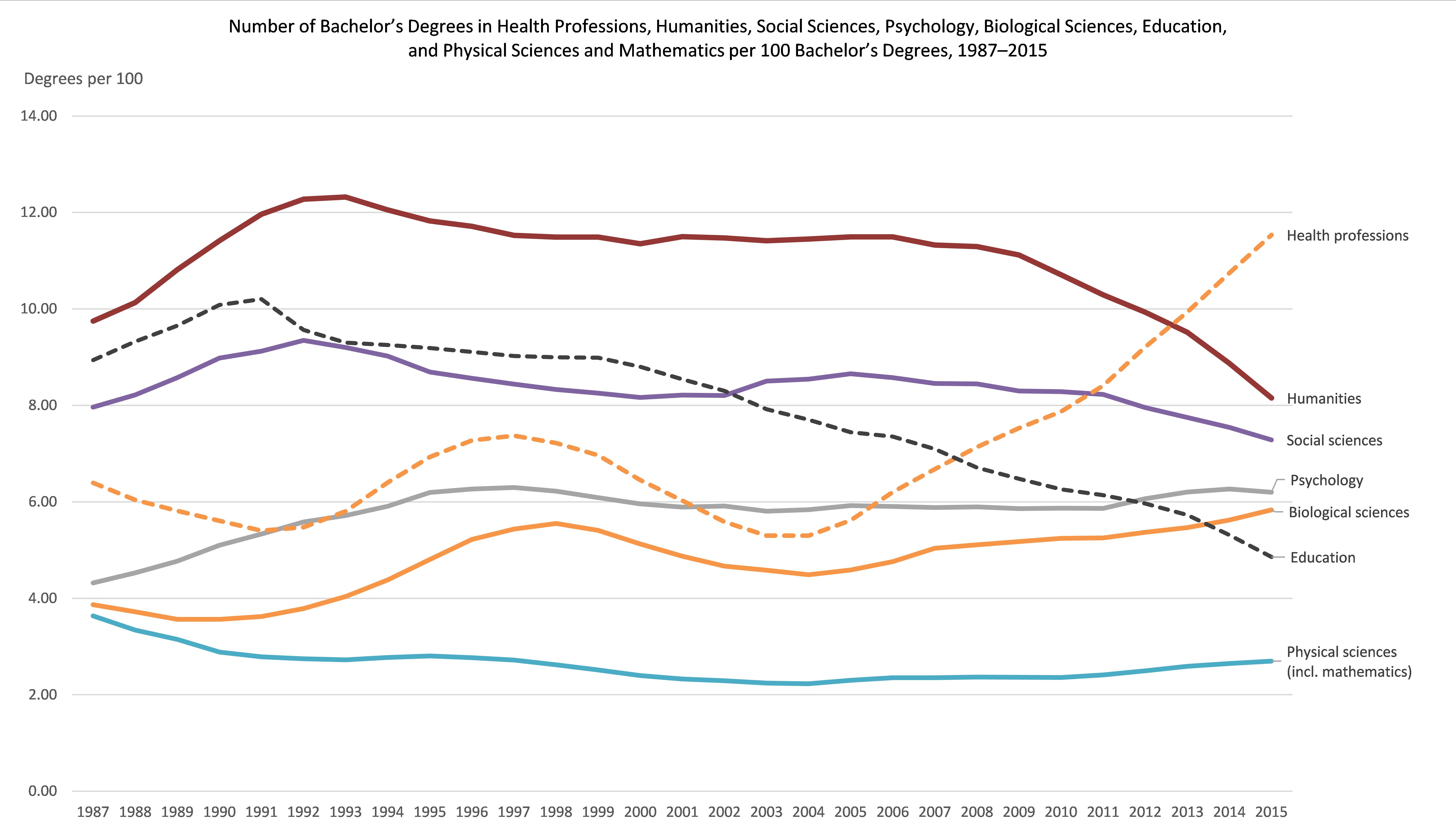 From 1987 to 2006 visual and performing arts saw its share of bachelor’s degrees grow steadily, and it has largely sustained its position since 2006 (fig. 7). Some degree programs categorized under visual and performing arts clearly belong to the academic humanities (art history and film studies, for example). Others signal student interest in hands-on creative work that results in tangible products or performances, whether with a professional aspiration or as a personal avocation (visual and performing arts includes degree programs in acting; dance; music performance; photography and cinematography; and studio arts and painting, sculpture, printmaking, ceramics, metal arts, and weaving). Student interest in these programs in the arts surely shares something in common with the appeal of creative writing that many English departments report draws students to the English major now. 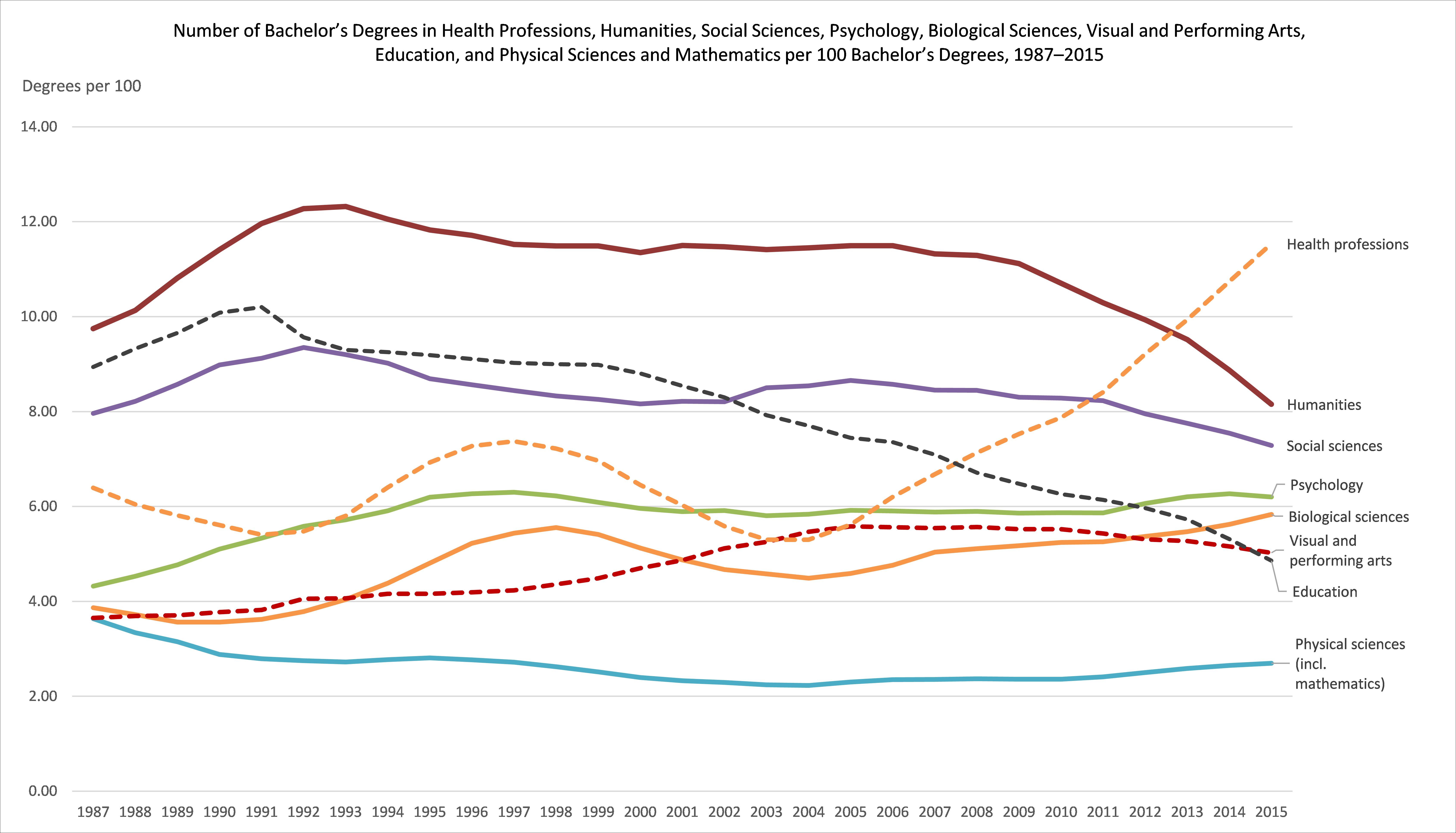 Figure 8 breaks out English, history, and languages other than English to facilitate comparison of trends in the share of degree completions for these humanities fields with those for the six other areas of study that are the focus of this post. 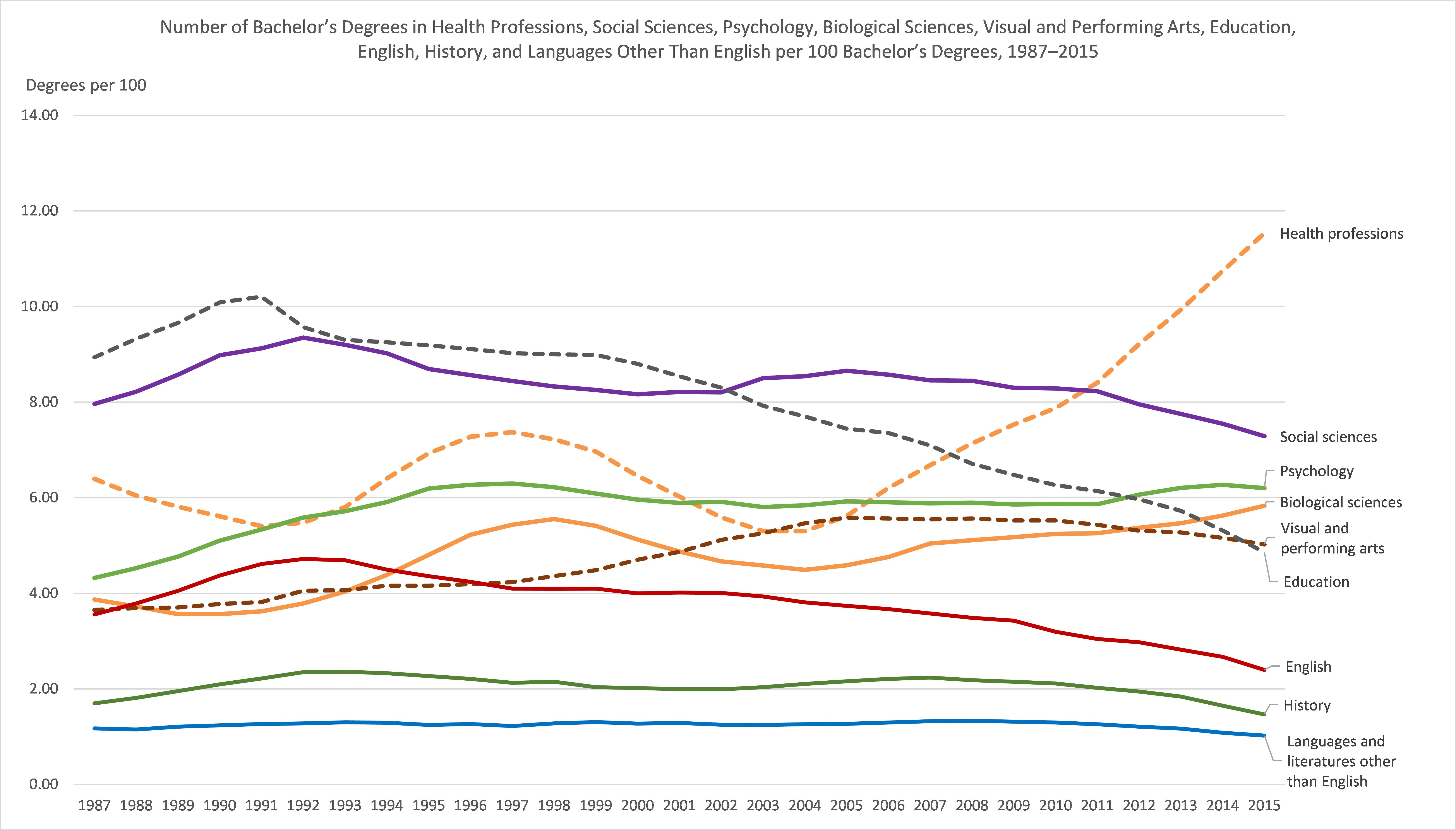 The parallel trend lines for English and education may be related, given the historic ties between the undergraduate English major and student aspirations to careers in secondary school teaching. This conjecture returns us to the questions we began with: How do we make the case for the wide-ranging benefits study in the humanities offers for students’ lives and career prospects? And what terms do we use to refocus public discourse on the contributions a humanities education makes to the greater social good as well as to students’ individual economic and career success? To address these questions, we might start in the classroom, encouraging students to reflect with intention on how the academic work they are doing today is exercising capabilities that will serve them well tomorrow, both in their working lives and as citizens.

Note
The National Science Foundation’s WebCASPAR Web site provides easy access to time-series data on degree completions, compiled from the degree completions component of the United States Department of Education’s IPEDS survey series. The WebCASPAR interface allows users to specify a wide range of variables and levels of granularity, from degree levels (associate to doctorate) to individual institutions or groups of institutions to national data in the aggregate. WebCASPAR completions totals include United States territories and outlying areas along with the fifty states and the District of Columbia. The figures in this post were created by the author from queries to WebCASPAR that asked for bachelor’s degree completions from 1987 to 2015 by two-digit CIP code and for bachelor’s degree completions from 1966 to 2015 by detailed academic discipline. Derivative calculations, such as the number of degrees per 100, are the author’s.