In 2012 the MLA and the American Historical Association (AHA) received grants from the Andrew W. Mellon Foundation in support of parallel initiatives to discover the current occupations of PhD recipients who had completed doctoral study since 1995—the last year humanities graduates were canvassed for the federal government’s Survey of Doctorate Recipients (SDR).1 The AHA and MLA studies used Internet searches to find public information about the current employment of a random sample of graduates. The MLA’s sample included 2,590 doctoral program graduates drawn from a universe defined by Dissertation Abstract International records indexed in the MLA International Bibliography for graduates who earned degrees between 1996 and 2011. A report on the MLA’s research appeared as “Where Are They Now,” a February 2015 post on The Trend. The AHA’s report, “The Many Careers of History PhDs,” was published in spring 2013. In 2018 the AHA published “Where Historians Work,” an online interactive data set that expands its initial research to catalog the career outcomes of 8,515 historians who earned PhDs at universities in the United States between 2004 and 2013. Both AHA resources are available at the Career Diversity Resources page on the AHA Web site.

In July 2017 the MLA’s office of research reached out to the 1,949 individuals in the original sample for whom e-mail addresses had been found in 2014 and invited them to complete a survey about their employment since they completed the doctorate. The survey received responses from 310 (15.4%) of these doctorate recipients, as well as from one respondent who was not part of the original sample. The information the 311 respondents provided is illuminating. At the same time, the small number of respondents reminds us how enormously far tracking efforts have to go before the profession can claim to have anything approaching a comprehensive picture of the occupations and employment histories of the nearly 100,000 individuals who, as documented by the Survey of Earned Doctorates, have earned terminal degrees in English and other modern languages since 1960.

Overall, 52.4% of the survey respondents held a tenured faculty position at the time they completed the questionnaire in summer 2017, and 79.1% were employed in postsecondary education—3.9% in tenure-track positions; 11.6% and 2.6% in full- or part-time non-tenure-track positions, respectively; and 8.7% as administrators (in addition to the 52.4% who were tenured faculty members). Of the 20.9% of respondents working outside higher education, 13.8% were in business, government, or nonprofit organizations, 3.5% were in K–12 education, 2.6% were self-employed, and 1.0% were retired (see fig. 1). The chances that respondents occupied a tenured faculty position in 2017 varied widely, however, by when the degree was received, as seen in figure 2. Only 35.5% of graduates in the 1996–98 cohort (76 cases) and 34.8% of those 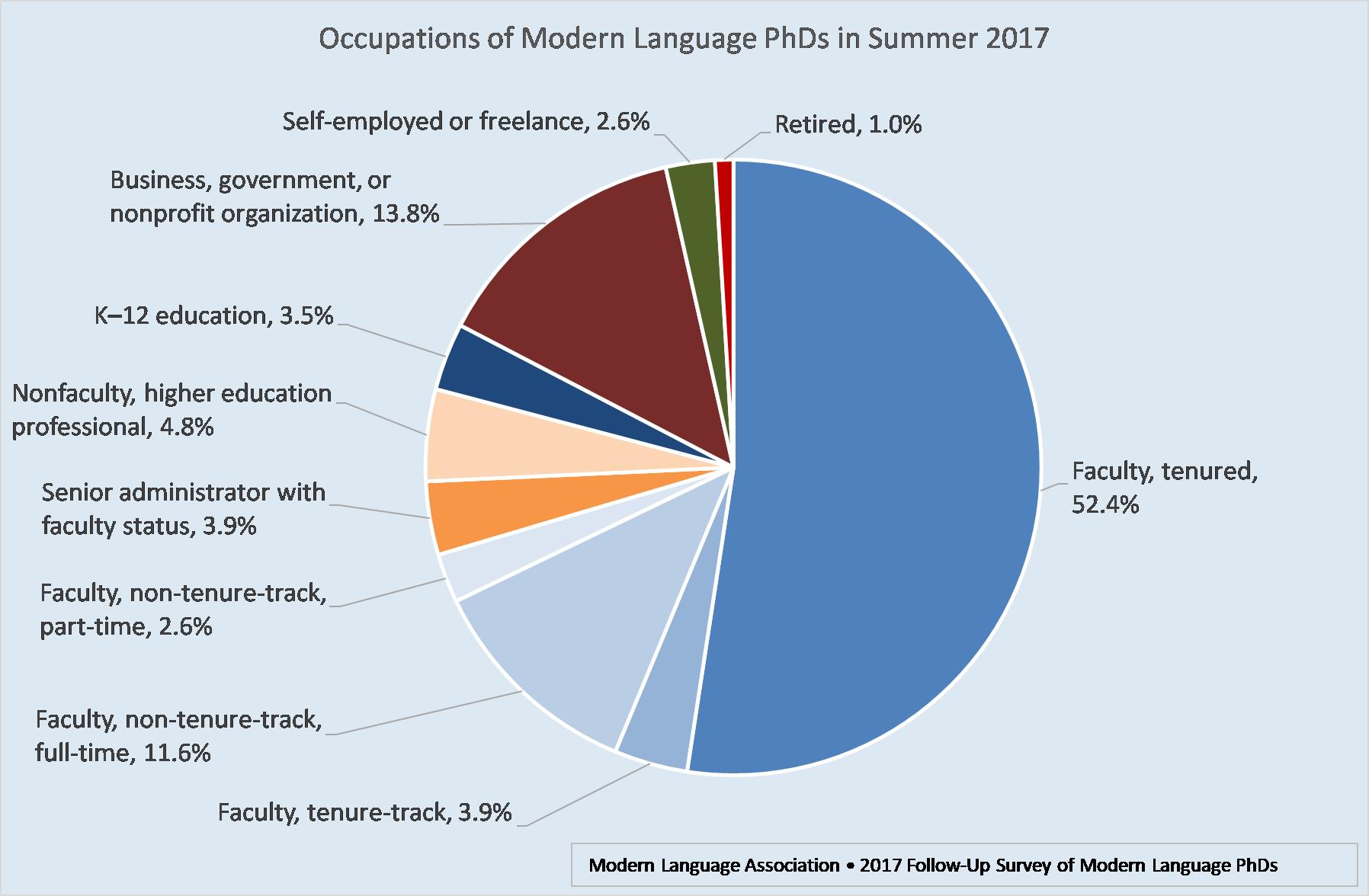 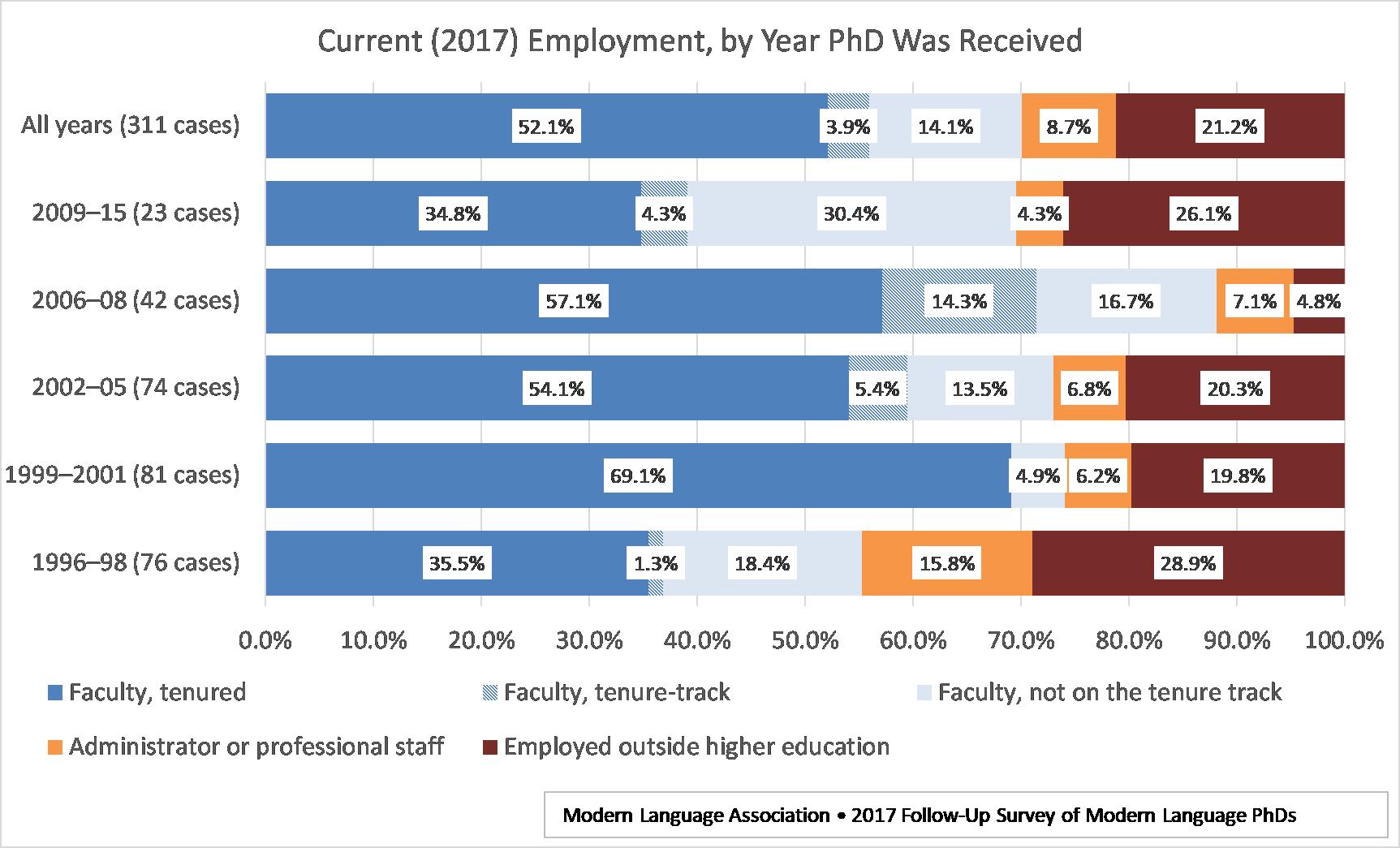 The information these PhDs provided about their first job placement after graduate school affords insight into the movement from tenure-track and non-tenure-track appointments to tenured faculty status—and from initial placements in academe into occupations beyond postsecondary teaching and administration. Figure 3 shows respondents’ first job placements after graduate school. 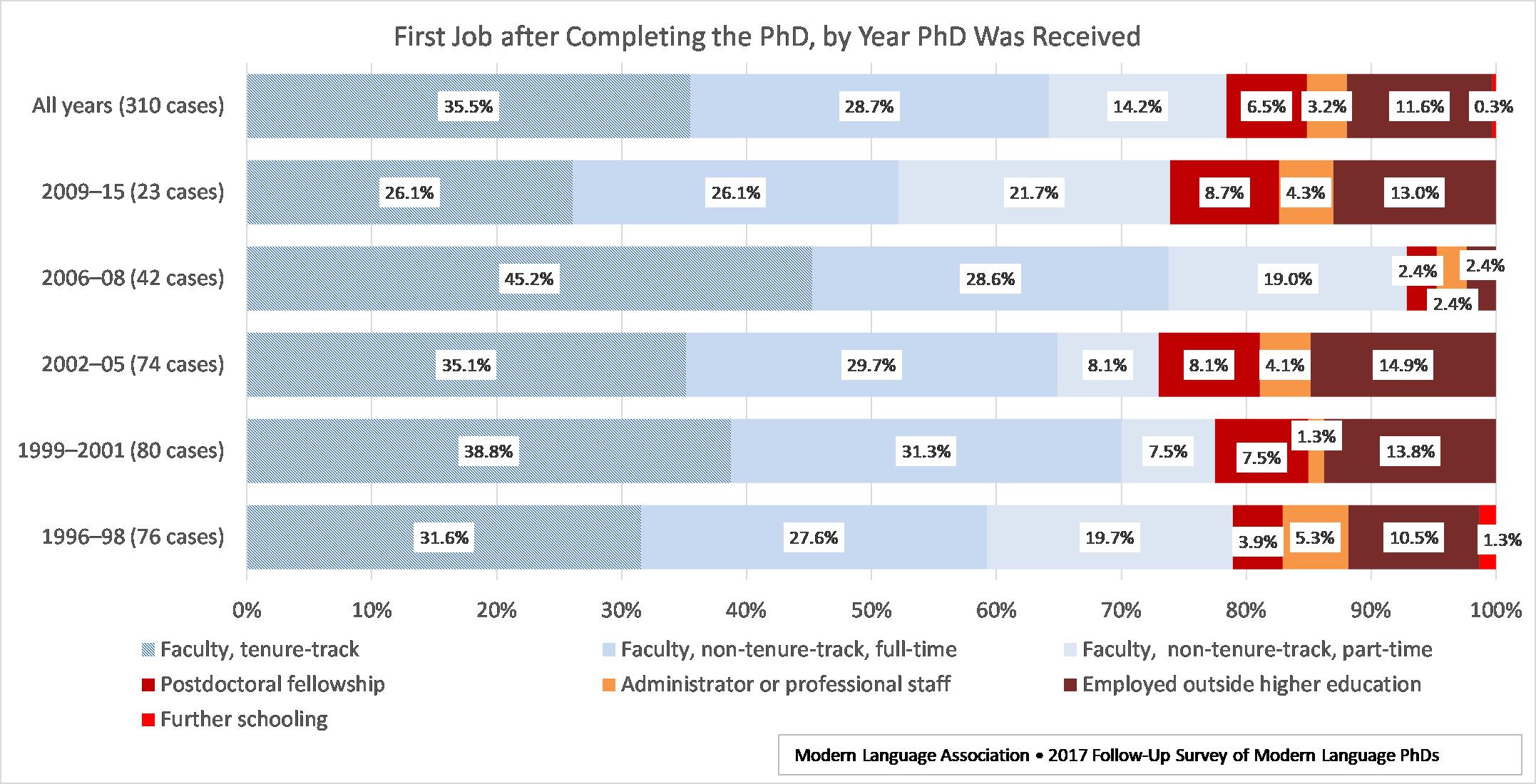 Comparing figure 3 with figure 2 quantifies how graduates in different cohorts varied less in their initial job placements than in their longer-term occupational destinations, measured as where they were working as of summer 2017. Of the 1999–2001 cohort, which in 2017 had 69.1% of its members in tenured faculty positions, 38.8% were placed to a tenure-track position directly from graduate school; 31.3% and 7.5% had initial placements in full- and part-time non-tenure-track appointments, respectively, which had contracted to 4.9% (both full- and part-time) by 2017. By contrast, of the 2009–15 cohort, which graduated into the very challenging economic and employment climate post-2008, only 26.1% found a tenure-track position directly out of graduate school, and only 39.1% had achieved tenure or a tenure-track appointment by 2017. Of course, the future may bring more movement from non-tenure-track to tenure-track positions for those in this most recently graduated cohort, as it has for three of its four predecessors. Or the future may confirm a more permanent shift to non-tenure-track appointments and to employment outside academe—a shift that is apparent in the data for the 2009–15 cohort to date and that characterizes the experience reflected in the far lower fraction of graduates in tenured and tenure-track positions in the 1996–98 group and the markedly higher 28.9% who have moved out of academe into self-employment or business, government, and nonprofit organizations. The most urgent message of these data may be how important it is for both doctoral programs and their students to remain open and active in consideration of the fullest possible range of employment options and opportunities, especially perhaps if a leading one of those options is the career of a tenured faculty member.

A report on all findings from the 2017 survey of doctoral program graduates, including earnings and job satisfaction, is available from the Career Resources page of the MLA Web site..